Shriver Media is a for-benefit, impact-driven media enterprise founded by journalist Maria Shriver. Shriver Media’s content ignites social change, empowers women, and fosters human connection. As journalists, we do this across multiple platforms—including award-winning films and documentaries, best-selling books, and highly engaging digital content—and in collaboration with partners that share our mission and our values. We believe media can be used as a force for good in the world and Move Humanity Forward.

Today, media is everywhere. Created by everyone. Let’s elevate it together.

PAYCHECK TO PAYCHECK: THE LIFE AND TIMES OF KATRINA GILBERT

I’ve Been Thinking: Reflections, Prayers and Meditations for a Meaningful Life

I’ve Been Thinking… The Journal: Inspirations, Prayers and Reflections for Your Meaningful Life On Redefining Your Definition of Joy On the Power of Radical Kinship Why Adversity Can Be Your Greatest Gift

The Women’s Alzheimer’s Movement™, founded by Maria Shriver, is a global alliance of individuals, organizations, researchers, foundations, influencers and industry leaders committed to finding out why Alzheimer’s discriminates against women. We believe that by answering the question of why women are disproportionately affected by Alzheimer’s, we will unlock the other mysteries surrounding this mind-blowing disease and that will lead to a cure for all. The Envelope Please™ enabled hotel guests to express their gratitude by leaving tips and notes of thanks for hotel room attendants in designated envelopes provided in their rooms. Hotel room attendants, predominately women, live on modest wages and work in physically demanding jobs. Yet, unlike other hospitality jobs, they often go unnoticed as they silently care for the millions of travelers who are on the road at any given time. Their hard work is many times overlooked when it comes to tipping. The Envelope Please™ makes leaving gratuity simple and secure.Our gratuity envelopes have been used in over 225,000 hotel rooms in the U.S. and Canada, and more than 4.3 million envelopes have been distributed. Feedback from room assistants and hotel guests has been overwhelmingly positive. We were privileged to have had Marriott International as our inaugural partner. The initiative is credited with inspiring similar gratuity programs to be adopted in hotels around the country. The Miami Dade County Board of Commissioners recognized The Envelope Please for its potential to boost the incomes of women working as hotel housekeepers, and in early 2016 the Commission passed a resolution that encouraged Miami hotels to join the initiative. 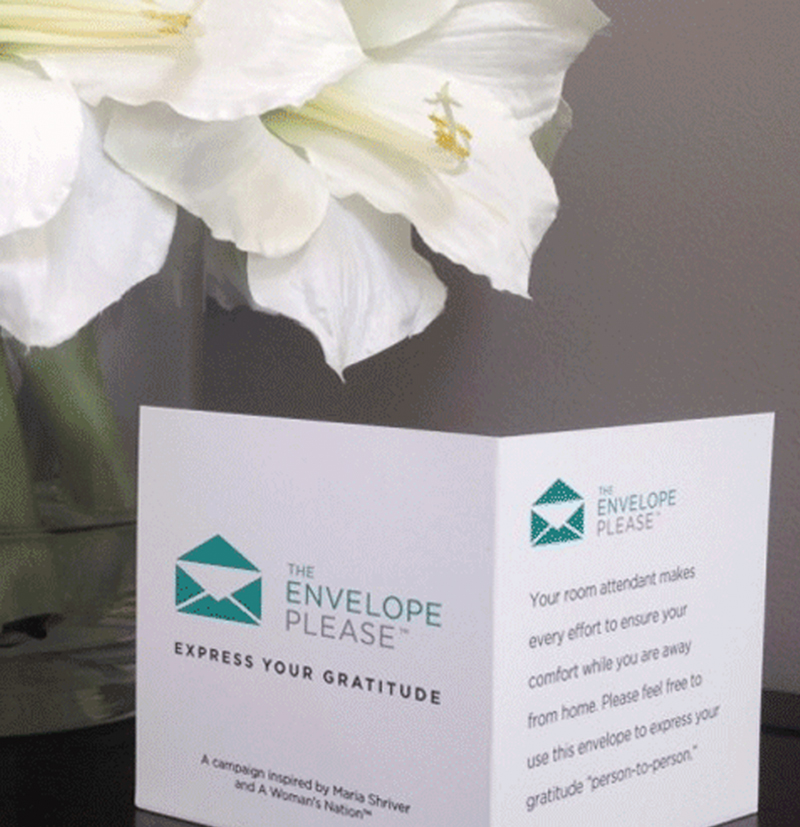 Team Maria rides to raise awareness and support for Best Buddies International, an organization founded by her brother, Anthony Kennedy Shriver, and that’s dedicated to creating opportunities for one-on-one friendships, integrated employment and leadership development for people with intellectual and developmental disabilities (IDD). Maria Shriver’s team participates in the annual Best Buddies Challenge: Hearst Castle to ride and walk each year in memory of Eunice Kennedy Shriver and Sargent Shriver. Since the inaugural challenge in 2004, Maria has served as the event’s honorary chairwoman. In total, Team Maria has raised over $2 million and recruited over 500 riders. The team has been honored to have the support of fantastic friends and fabulous companies over the years – many of which are California-based. Some of the top sponsors have included Safeway, Shell, Pfizer, Bayer Healthcare, MY Skincare, and The California Endowment. Some, like Chevron, have even left the team to form their own corporate ride teams, which we couldn’t be happier about. Above all else, it’s about inspiring others to support people with intellectual disabilities. Founded by Maria’s mother Eunice Kennedy Shriver and now led by her brother Timothy Shriver, the Special Olympics transforms lives through the joy of sport, every day, everywhere. It is the world’s largest sports organization for people with intellectual disabilities: with more than 4.7 million athletes in 169 countries — and over a million volunteers. Maria Shriver has worked tirelessly on behalf of women and girls since the start of her career. As First Lady of California, she addressed the emerging needs of women and spearheaded what became the nation’s premier forum for women, The Women’s Conference. Under Shriver’s direction and vision, it grew into the world’s premier forum for women and directly funded more than $5.5 million in charitable programs that served women on the frontlines of humanity. In 2004, Shriver also created The Minerva Awards and Minerva Prize to recognize and reward remarkable women who stepped forward and changed the world with their courage, wisdom, and strength. Since 2009, Shriver has also produced the groundbreaking Shriver Report Project, a series chronicling and exploring seismic shifts in American culture and society affecting modern women and their families today.

Shriver’s WE Connect program linked millions of low-income working families, many of whom had never before needed help, with financial resources such as the Earned Income Tax Credit, foreclosure assistance, job placement, resume assistance, and other important money-saving programs. The program also provided more than 2 million healthy meals to families in need. Shriver’s The Modern House Call for Women, a groundbreaking three-day health and financial services clinic, provided 5,000 free medical, dental and financial services to nearly 2,500 people. Through Shriver’s WE Invest program and partnership with Kiva.org, hundreds of women entrepreneurs in the U.S. received micro-loans totaling more than $1 million.

JOIN ME IN MY MISSION